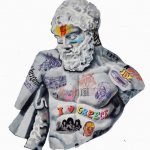 Erik Hårdstedt
by Karin Faxén-Sporrong
As a child and teenager Erik Hårdstedt was a passionate plein-air painter and bicycled around in his hometown selling his watercolour paintings. The sales gave him great confidence and economic funding for his basic art education without having to take any loans. Today his works take on a more surreal manner, full of unusual croppings of still life, modern ruins and references to popular culture, consumerism, and mass media. A caleidoscope of realistic and fantastic disharmonic detail creeps into all his paintings. He wants complete control of all details in his works but he maintains the use of watercolour because he is challenged by the difficulty of this medium. As an artist Erik Hårdstedt is dependant on strong visual impressions and dynamic impuses, so for many years he has travelled to India on a regular basis. In India one may find extreme contrasts: colonial architecture alongside modern skyscrapers and modern technology alongside deep poverty.

Bo Mossberg
by Jacqueline Stare
From the age of 4 or 5, Bo Mossberg loved mushroom hunting in the woods with his father. Later in life mushrooms would be the subject of his first exhibition and his first book illustrations. He has also illustrated the enormous book project “The Nordic Flora” which took a staggering 12 years. The project was started in 1979 and was issued in 1992 comprising of 2.500 plants. In 2018, the third edition was released. When Bo Mossberg had finished the basic school training at the age of15, his drawing teacher went to the Swedish University of Arts, Crafts and Design and showed them some of his drawings insisting that they had to admit this boy – which they did (as their youngest pupil ever). During the 50’s and 60’s his love for music took over and he played saxophone and clarinet in jazz bands. From 1968, however, he has succesfully worked as a freelance illustrator. Besides his illustration and his music (he still plays the clarinet every day) Bo Mossberg is also involved in nature conservation and environmental issues.

Evert Taube the Artist – a book review
by Håkan Bull
This book is a co-operation between Evert Taube’s granddaughter Maria Taube and the Taube Company that celebrates its 40th anniversary this year. Besides being related to Evert Taube, Maria Taube has worked for 35 years at the Modern Museum of Stockholm as a curator and art educator. In Sweden Evert Taube is considered a national poet, but he was also a writer, an artist, a troubadour, and an adventurer. He was connected to the sea from his upbringing by the Swedish west coast and from his teenage years he dreamed of becoming an artist. He seeks art education but after a couple of years his family will no longer support him. He is forced to take job on board a ship as a deckhand and later on he lives in Argentina for 5 years. When he returns to Gothenburg he takes up his art studies again. From 1925 onward he gains much succes as a music artist and a writer, but he also exhibits his art works from time to time. He gets good reviews and sold some of the works to the National Art Museum.