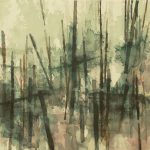 Urban Beinö
by Håkan Bull
Urban Beinö paints the forest as a concept and narrative, not a specific forest. The forest is an important factor in human life, as a natural resource, as a climate regulator and in our cultural history. The dark forest can be a perilous place where one can get lost or be robbed, but it can also be a tranquil hideaway. He tries to capture the essence of the forest in his compositions: vertical growth from the deep darkness of the earth to the light of the sky along with the diagonal motions of the branches. His images can be viewed as a section of a much larger organism that seems to continue further than the edge of the sheet. In his later paintings he seems to view the inner life of the forest on a cellular level. Urban Beinös paintings are so abstract that it can sometimes be hard to perceive a forest when looking at the works. He uses lots of water whether he paints with watercolour or with acrylic paint.

Jonas Pettersson
by Marianne Gross
Computer programmer and artist might seem an unlikely combination but that is precisely what Jonas Pettersson is. He is educated in computer technology and has an art degree as well. He has tought at an art school for 12 years but now he switches between being a computer programmer and an independant artist. He turned to watercolour painting when he had a child, because he did not want to worry about chemicals and solvents in the home. He joined NAS at this point and states that he has found much inspiration in the network he has encountered in the society. Even though he is extremely skilled at classical and pure watercolour painting, he loves to challenge himself by experimenting with the media and pushing materials and techniques to their limits. One of his latest projects features a fully functional “watercolour organ” made with painted watercolour paper playing pieces of music of hos own composition transferred digitally via an app he has developed.

The x-ray vision in Kristbergur Ó. Pétursson´s watercolours
by J B K Ransu
Kristbergur Ó Pétursson was born in Hafnarfjordur in 1962, where he still lives and works. The town of Hafnarfjordur is bordered by the ocean, but on other sides it is surrounded by rough lava landscape. Kristbergur´s paintings are inspired by the structure and physicality of the lava landscape. The sense of flesh is overwhelming in his oils and to translate that into watercolour would seem unthinkable. Kristbergur has, however, found an effective way to do it. He layers the water dissolvable colours thinly over each  other, allowing them to dry and wet again. In some cases he uses liquid masks to preserve shapes, lines or even written words, while he covers parts of the paper with the transparent colour. These shapes, lines or written words give the illusion of being visible from under a multicoloured layer, and brought forth like in an x-ray image.

Nordiska Akvarellsällskapet 2000–2009
by Jacqueline Stare
During the years 2000-2006 I was on the board of NAS and from 4/04 to 4/13 I was the editor of the magazine akvarellen. I had Anette von Koch and Peter V Nielsen in my editor group. NAS felt very proud when the Nordic Watercolour Museum opened in Tjörn in 2000. Several NAS-members have been watercolour instructors at the museum. In 2002 Bera Nordal from Iceland was appointed leader of the museum. She still holds the position with a wide and substantial international network. Since 2000 NAS has been a member of ECWS (the European Confederation of Watercolour Societies). Along with the NAS exhibition Nordisk Akvarell 2007 in Ronneby the 8th International Watercolour Festival was held with participation from various European countries. In 2003 NAS launched a new website and in 2007 an internet forum for members. To celebrate the 20th anniversary in 2009, a juried internet exhibition was organized. In 2004 we launched the Vattenlek-competition where members were invited to submit entries for illustrations to be printed on a deck of cards. In 2001 the juried exhibition took place in Finland and in 2004 in Denmark. During this period we began to get more members from Iceland and in 2010 the next juried exhibition was held in Iceland.

Report from the Annual Meeting 2019
by Marianne Gross
The annual meeting took place in Baskemölla at Anna Törnquist’s studio. The formal part of the meeting followed the guidelines and the report for 2018 along with the accounts and budget for 2019 were presented and approved. Anders Högberg left the position as President and was replaced by Marianne Gross. Berit Barkin and Björn Bernström also left the board. Berit Barkin will still be responsible for member registration and book-keeping. New Swedish board members are Ida Rödén og Maj-lis Olsson. Jasper van der Wurff, Commercial Director i Colart, presented the Winsor & Newton Award 2019 to Emma Larsson. Colart kindly donated goodie-bags containing Winsor & Newton products. Before dinner, the members visited two local artists: Elisabeth Palm (ceramics) and Anders Wingård (glass). In a break during the meal Anki Möller entertained the guests with songs and stories from her childhood in the region. Most of the participants stayed on for th workshop led by Anna Törnquist the following day. In 2020 we plan to hold the annual meeting in Denmark.