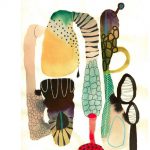 Emma Larsson – alias @Zebrakadebra
by Håkan Bull
Emma Larsson has 56.000 followers on her instagram account Zebrakadebra. Her paintings are abstract but seem familiar in some way and are very personal. She works freely and organically. Expanding shapes emerge just like weird mushrooms or flowers in a rain-forest and the patterns resemble African textile design. Emma Larsson confirms her interest in ”ethnographic art” but states ”My art must speak for itself without conventions. I want it to be free. Like poetry without words…” Other people have also connected her art with textile design. She has a collaboration with Paris Fashion Week where she interprets creations by Issey Miyake, Kenzo, and Givenchy among others, and she has designed a textile for @artpiece. She paints on dry paper in several steps without preliminary sketches, but leaves much to chance. After the paintings have dried she decides whether to keep them as they are, to elaborate on them, or to discard them. Her art is experimental and magical.

Mervi Patala
by Camilla Granbacka|
The Winsor & Newton Prize 2018 was awarded to the Finnish artist Mervi Patala. Her paintings are realistic and emotional and she aims to convey how memory works and how it is distorted in time. Children and daily chores are among her favourite subject matters. She has always been interested in family history and she gets a lot of her inspiration from old photo albums. Her works seem nostalgic and oozes of summer and childhood memories, but dark shadows are also present. She says: “I am interested in the ominous and contradictory sensation. What at first seems happy and idyllic might have a sorrowful and threatening background. I try to tell stories of what is happening behind the curtains”. Mervi Patala works in large formats on the floor, initially making controlled pencil drawings on the paper before starting her painting work. The drawing is a kind of frame for her to work within and hereafter she can work more loose with the colouring.

The swans of Edda Þórey Kristfinnsdóttir
by Jon B K Ransu
In Greek mythology Zeus disguised himself as a swan. However, the swan was mostly attributed to Apollo, and the swan also appears in fairy tales, as shape-shifters or princes and princesses bewitched by an evil witch. In fact, swans have so many meanings and myths bound to them that seeing a painting or a sculpture of a swan only as an image of a bird is highly unlikely. So, swans appearing and reappearing in Edda Þórey’s works does give them endless points of views. Swans for Edda Þórey are connected to childhood memories. Her times feeding them with her family down at the pond, or her first remembered experience of ease and tranquility as a child awashed in the silence of nature. And swans were there, flying over. Those memories serve as an inspiration for her art which she adopts into her sculptures, paintings and watercol­ours. Thus, the images of swans are there to mediate the feeling of ease and tranquility. They also symbolize freedom and travels in Edda Þórey’s works.

Maxi
by Jacqueline Stare
When he was 8 years old Maximilian Svensson saw a book containing watercolours by Lars Lerin, and began immediately hereafter to paint watercolour himself. Today he is certain he wants to be educated as an artist and become as skilled a painter as his idol, Lars Lerin. Now he is 13 and a kind of celebrity in Sweden. His parents do not allow him to sell many works so as to avoid a commercial circus round the young artist but he sometimes gives paintings to charity. Most of his watercolour skills Maxi picks up from youtube and he paints a couple of hours every day. A couple of years ago Maxi sent a portrait he had painted of Lars Lerin to him and received a reply with a small painting as a gift and some encouraging words. Later he had the chance to talk to Lars Lerin who invited him to exhibit at the Sandgrund Art Hall. He did so in 2016 with 82 watercolour works – none of which were for sale – even though he created some commotion due to his talent and his young age. But he feels the urge to create art for his own sake – not for anybody else’s.

”See you at Freden!”
by Håkan Bull
The book “See you at Freden” tells the story of the famous old Swedish restaurant “Den Gyllene Freden” and its owners and guests. This book is the third in a series describing well-known establishments in Stockholm in a general historical context. We mention this book because Lars Melander has chosen to illustrate it with expressive watercolour and ink works. The book describes the many historic guests that have been a part of defining the “soul” of the place. The famous Swedish painter Anders Zorn was a regular as well as the poet Bellman, and Carl von Linné, the scientist.