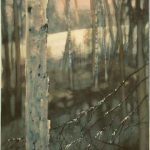 Nordic Watercolour Society 30 years (1989-2019)
by Håkan Bull/Lennart Köpsen
During the anniversary year we intend to publish 3 articles commemorating the history of the society. In this issue there is an article that was first published on the occasion of our 10th anniversary: From humble beginnings the society has developed to a Nordic association comprising of 1800 members and a current 50 million SEK project: The Nordic Watercolour Museum on Tjörn. Arne Isacsson, professor and artist, was the leader of many watercolour courses in the 80’s. During one of these courses in 1989, Bertil Böös came up with the idea for an association. Lennart Köpsen was the first president. The aim was to raise the general awareness of high-quality watercolour art, and there was also an idea to build a Nordic watercolour museum. In 1995 the board started co-operations with Tjörn municipailty, and the museum opened in 2000. The board continues their work in other fields: Free Academies, juried exhibitions, awards, and travels. from 1992 to 1997 Arne Thomassen developed akvarellen from a member magazine to an interesting art publication.

Curt Hamne
by Jacqueline Stare
Curt Hamne was a very succesful illustrator and copper printmaker when he became ill in 2007 and had to give up working. He managed to start creating art again, but ever since he has painted using watercolour. The subject matters are still nature in all seasons, especially in Dalarna and Hälsingland. He never makes sketches, but manages to work freely from what he sees or from his imagination. The sizes of his works span from quite small formats to measurements of 105×75 cm. To paint snow and water in a way that seems realistic to the viewer is difficult, but in his paintings I feel as if I could just reach out and make a snowball from the landscape. I feel that Curt Hamne’s imagery creates an instinctive feeling of security for us viewers when we accompany him through the changing seasons of the landscape in which he belongs and that he has depicted with so much intensity for almost 50 years, first in black-and-white and now in watercolour.

Lone Schiøtz
by Marianne Gross
Nature is an essential parts of Lone Schiøtz’ art and life. For many years she has been known for her eider ducks that she paints sitting carefully and quietly among them near their nesting grounds. She is very fond of the birds as well as other creatures such as frogs, toads, and ladybirds, but apart from that she also creates many landscapes whith particular attention to rocks, cliffs, and the sea. Lone Schiøtz started her artistic journey as a ceramist and later moved on to printmaking, drawing, and other art forms, but for many years now she has concentrated on watercolours. Lone Schiøtz is continuously experimenting, and she has tried many different media and expressions. She has worked in various fields such as teaching, illustration, logo design, and newspaper columns. Nowadays she will sit outside and paint the Nordic landscape with all its mist and vapour. The transparency of watercolour is perfect to depict the hazy greyness of the sky. She does not believe she can compare with the perfection of nature, but Lone Schiøtz thus pays tribute to the landscape, returning with a piece of work that might give the viewer an insight into the atmosphere she experienced while the painting was created.

Beate Gjersvold
by Live Sætre
Beate Gjersvold does not paint actual physical landscapes that can be associated with real places, but wants to communicate various moods from silence and peacefulness to unrest and insanity. In her paintings there is a hint of mystery. She is very conscious about her choice of colours. She has spent many years researching how each pigment reacts and how the pigments interact when they meet on paper depending on how much water is used. The number of colours in her palette is limited and she finds the study of pigments very relevant. Her paintings are the result of what she calls “controlled coincidences”. The challenge is to let the painting flow while still being in control. She never includes people in her works and only seldom traces of human activity symbolized by be rusty brown elements (painted with burnt sienna) to indicate decay and desolation. Beate Gjersvold is fascinated by the rusty colour to indicate that nature relentlessly reclaims man-made things.